Posted by Richard Willson 1607vtl on

Event cancelled due to guest speaker’s illness  hoping to reschedule!

Can you believe that this year we will celebrate the 10th year that the League has sponsored a story telling event to raise money for our efforts to Make Democracy Work?!

This year our theme will be  "Democracy Here and There, Now and Then".

Our speaker will be Dr. Kenton Stone, 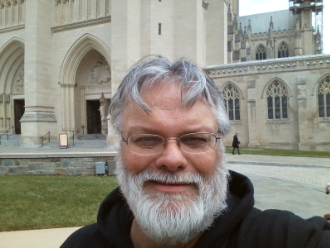 the son of an Appalachian family that relocated and was living in the shadow of the Bethlehem PA Steel Plant at the time of his birth. Young Kent Stone started elementary school in Bristol near the Virginia-Tennessee state line where his dad was a pastor. The next year the family relocated to Montevideo, Uruguay in South America to pursue missionary work.

Though he attended a British school there – “a very Harry Potter kind of place” – he remembers similarities between his life there and the culture of Texas – cowboy country, gauchos in full cowpoke regalia – and remembers participating in winter cattle drives as a boy.  Uruguay is the same distance from the South Pole as Hagerstown is from the North Pole.  Though the seasons are reversed, July is as cold in Uruguay as January is in Hagerstown.

The summer of 1966 when the Stone family took up missionary work in Montevideo, civil war broke out between rebel Tupamaros partisans and government troops.  The violence and disruption went on for 6 years, much of it in neighborhoods where the Stone family lived.  Young Kent experienced repression and the loss of democratic institutions first hand, including his own imprisonment and torture.

Following college in the U.S. and a doctorate in Spanish from the University of KS, Dr. Stone worked as a professor and Director of the Latin American Studies program at Drake University. In spite of his University “tenure for life”, he left Drake to earn a masters degree in hospital chaplaincy from Northwestern University seminary and was ordained in the United Church of Christ.  With that preparation, he served as both pastor and emergency room responder at Chicago's Loyola University Medical Center, and later chaplain to the heart transplant and brain surgery units of St. Luke's Medical Center in Kansas City.

Following a diagnosis of third stage kidney disease that forced another career change, since 2011 Dr. Stone teaches Comparative World Religions, all levels of Spanish language and culture, as well as Death and Dying classes to nursing students, through his faculty position at the Allegany College of Maryland in Cumberland.

Dr. Stone regularly travels to Latin America and is well informed on current events in much of the region.  He will share his experiences growing up in a time of political turmoil and the dismantling of democracy in Uruguay and elsewhere, relating those stories to what he sees occurring in the present day as current democratic institutions are threatened here and abroad.

Buy your ticket(s) in advance by entering the number of tickets you wish to purchase below, or call or email Fanny Crawford (see below).  Tickets at the door will be $12.00 if room is available.